Eggs: What Are You Really Eating?


Why Do Hens Lay Unfertilized Eggs?


Hens ovulate for the same reason female humans do: to reproduce. In chickens, the ovary is a cluster of developing ova, or yolks. Female human ovaries also contain developing eggs. In women, a mature egg is released from the ovary once a month. If the egg becomes fertilized, it attaches to the wall of the uterus and begins to form an embryo. If the egg is not fertilized, it is eliminated. This happens roughly two weeks before menstruation (the shedding of the uterine lining), a process which exacts a heavy toll on the female body. Although chickens do not menstruate (and thus their eggs are not “chicken periods” as is sometimes asserted), the cycle of creating and passing much larger eggs relative to their body size and weight is arguably even more physically taxing, especially in modern hens who have been bred to produce such unnaturally high rates of eggs.

How Many Eggs Do Chickens Lay?
In fact, the process of making and passing an egg requires so much energy and labor that in nature, wild hens lay only 10 to 15 eggs per year.  The Red Jungle Fowl (see photo)— the wild relatives from whom domestic layer hens are descended — lay one to two clutches of eggs annually, with 4 to 6 eggs per clutch on average.  Their bodies could never sustain the physical depletion of laying the hundreds of eggs that domestic chickens have been forced to produce through genetic manipulation. It is a common misconception that chickens are always just naturally “giving” eggs, because modern egg hens have been intensively bred to lay between 250 to 300 eggs a year. But in the wild, chickens, like all birds, lay only during breeding season — primarily in the spring — and only enough eggs to assure the survival of their genes.In order to obtain a hen, one must purchase her from a breeder. Breeders, obviously, don't produce wild hens which only lay around 15 eggs each year. 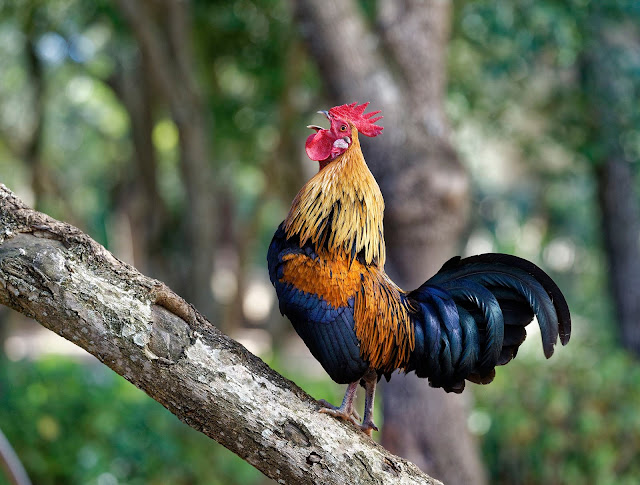 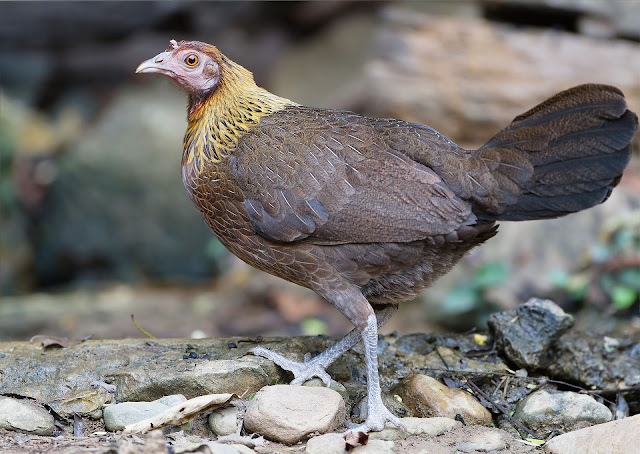 Are Eggs Dead Baby Chicks?
Not technically, since eggs sold for human consumption are unfertilized, but the egg industry kills millions of newborn baby chicks every single day; more than 260 million are killed every year in the U.S. alone. At the hatcheries that supply female chicks to factory egg farms, small farms, and backyard egg hen enthusiasts, male chicks are sorted and killed shortly after birth by being ground up alive in giant macerators, gassed, or left to suffocate in garbage bags and dumpsters. Because male chicks will never lay eggs and are not the breed sold for meat (meat chicken breeds have been genetically manipulated to grow much more breast muscle and flesh), they are considered worthless to the egg industry, and so are disposed of as trash. Destroying male chicks is standard egg industry practice worldwide (see the 5 second graphic video below). Even the most rigorous humane labeling certification programs in the U.S., Certified Humane, American Humane Certified, and Animal Welfare Approved, permit the killing of male chicks at the hatcheries which supply their egg farms with laying hens.

The Labor Intensive Process of Creating Eggs
It takes 24-26 hours for a hen to internally construct an egg (adding the albumen, shell membranes and shell). Once a yolk is fully developed, it is released from the ovary into the oviduct, a long, convoluted tube made up of five different sections: the infundibulum or funnel; the magnum; the isthmus; the uterus or shell gland; and the vagina. Each of these sections is like a station along an assembly line and is responsible for a specific stage of egg formation.
The first stop is the infundibulum, a 3-4 inch long muscular portion of the oviduct which engulfs the ovum, or yolk, released from the ovary. The ovum remains in the infundibulum for 15 to 18 minutes, and it is here where fertilization would occur if the hen mated with a rooster. However, eggs sold for human consumption are not fertilized (most egg-laying hens never even have a chance to mate.)
Reproductive tract of female chicken. The next stage of egg construction occurs in the magnum, the largest section of the oviduct at 13 inches long. The ovum, or yolk, stays in the magnum for 3 hours while the albumen, or “egg white,” is added. The third stop is the isthmus, a constricted portion of tissue where the inner and outer shell membranes of the developing egg are added over a period of 75 minutes.
The longest stage of egg production occurs in the shell gland or uterus. This is where the shell is deposited around the egg, which takes 20 plus hours. Egg shells are mostly made of calcium carbonate, and for each shell produced, the hen must mobilize approximately 10% of the calcium stored in her bones. This is a main reason egg-laying hens are so commonly afflicted with debilitating osteoporosis, as the near constant production of an unnatural quantity of eggs depletes their bodies of massive amounts of calcium.
The last stop in egg production is the vagina. This is where a thin outer coating of mucus, called the cuticle or bloom, is added to the shell. The vagina also pushes the egg out through the vent or cloaca, the shared exit through which urine, feces, and eggs are excreted.

Eggs and the Impact of Laying on Chicken Health 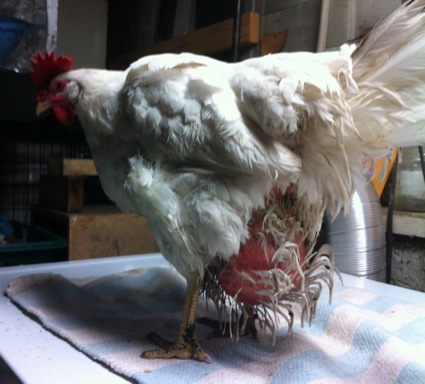 The unnaturally high rates of labor intensive, energy depleting egg production that modern hens are forced to sustain means that even on small farms and backyard chicken operations, hens are virtual prisoners inside their own bodies. Overproduction of eggs is responsible for numerous disorders in hens, including often fatal diseases of the reproductive tract; osteoporosis and accompanying bone fractures; and, in some cases, total skeletal paralysis, sometimes referred to as “caged layer fatigue.” Osteoporosis and bone fragility from unnatural lay rates are also greatly exacerbated by lack of exercise: more than 95% of egg laying hens in the U.S. spend their entire lives confined in battery cages so small they cannot even spread their wings. By the time hens reach the slaughterhouse at 18 months to 2 years of age, their wing and leg bones are frequently riddled with painful breaks.
Reproductive disorders in egg laying hens include tumors of the oviduct; peritonitis; egg binding (large eggs getting stuck and being slow and painful to pass); and uterine prolapse, a condition in which the lower portion of the oviduct fails to retract back into the body after oviposition, or the depositing of an egg. Like egg binding, prolapse is commonly a result of small birds being genetically manipulated to lay an unnaturally high rate of unnaturally large eggs. 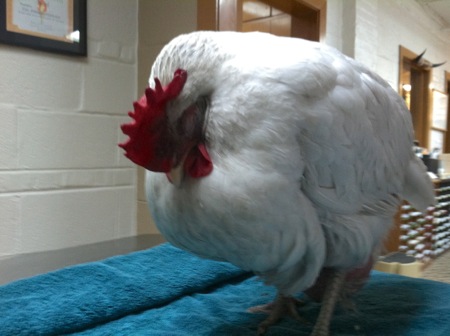 Sweet Pea in her last days of life.

Sweet Pea was a cherished Free from Harm rescue with an incredibly sweet disposition and tremendous zest for life. She developed several acute episodes of egg yolk peritonitis, a common disorder and frequent cause of death in egg laying hens. Egg yolk peritonitis results from egg yolks diverting into the abdominal cavity of hens, or from rupture or lodging of thin-shelled or otherwise malformed eggs in the oviduct. (Thin-shelled eggs are common in layer hens because the birds do not have sufficient calcium stores to produce such a high rate of shells). When eggs break or yolks accumulate inside of hens, this leads to a build-up of rotting egg material in the oviduct and abdomen, which causes painful swelling and frequently fatal bacterial infection. Despite the best veterinary treatment, Sweet Pea suffered in her final days before succumbing to this common killer. 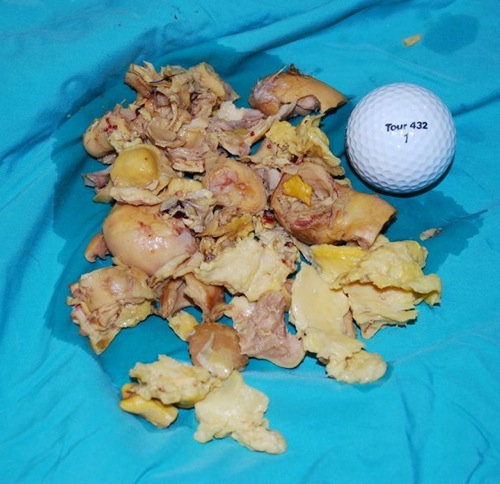 More than one pound of rotting egg material removed from sick hen.

Dr. Peter Sakas, the veterinarian who treats all of Free from Harm’s rescued chickens, recently sent us this image (above) after surgically removing more than one pound of rotting egg material from the uterus of another hen. He writes:“This is something we see so commonly with hens: reproductive tract complications, egg binding, decomposed eggs, egg yolk peritonitis, eggs rupturing through the oviduct, all sorts of problems. It is tragic as some cases are so severe they can not be corrected, but we try to save these wonderful animals!
“We had a hen come in as she was weak, lethargic, and had an enlarged abdomen. She had been a prolific egg layer but had recently stopped. We hospitalized, stabilized her, and in a few days performed an exploratory surgery. We removed over one pound of decomposed egg material from her oviduct (uterus).”
Jewel Johnson, who rescues chickens at Danzig’s Roost in Colorado, wrote to us regarding the engineered overproduction of eggs in laying hens: “I’ve had two hens die on the operating table. One was found to have 14 eggs in her. Just because one egg gets stuck and cannot be laid, it does not stop her body from making another egg the next day, and the next, and the next…”

Beyond Eggs, Beyond Exploitation
Chickens were only ever domesticated for one reason: to exploit them. All chickens used for meat and eggs are the result of centuries of violent domination and decades of invasive genetic manipulation that dooms even those lucky enough to be rescued to a lifetime of unnatural frailty and disease. This means that all eggs, even those from rescued hens, are the product of injustice. Since humans have no biological need to consume eggs, we can withdraw our support from this exploitative industry by choosing plant-based egg alternatives for baking and cooking. Those who rescue hens can feed their eggs back to these birds, who will typically eat them with great enthusiasm, and grind the shells into their feed to restore much needed calcium.

For more information on the suffering and mistreatment of chickens in the egg industry, including little known practices on farms selling “cage-free” and “free range” eggs, please see our feature on standard egg industry practices 🔗
See our entire collection of posts on the subject of eggs and egg laying chickens 🔗

Finally, even if someone had a hen living in their backyard or purchased eggs from free-range/freedom/organic/cage-free/antibiotic-free/hormone-free/grass-fed/local facilities, egg-consumption is still wrong because exploiting a hen's body and stealing the eggs she produces are crimes of commodification. She is only being valued because people enjoy eating her ass-droppings. In order to obtain a hen, one must purchase her from a breeder. Breeders, obviously, don't produce wild hens which only lay around 17 eggs each year.
http://adaptt.org/veganism.html 🔗
=====================
The difference between fertilized and unfertilized eggs comes down to whether a rooster has been involved or not. Hens do not need a rooster to lay an egg; they do so (almost daily) on their own simply according to light patterns. However, if a rooster does mate with a hen, the eggs she produces are fertilized and, under the right incubation conditions, can bear chicks. No rooster means zero possibility of the egg ever becoming anything more than that.


VIDEO : What is behind eating eggs (english-spanish subt.) 🔗 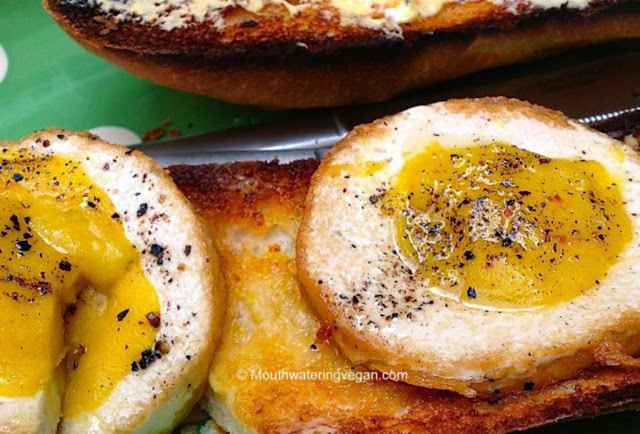 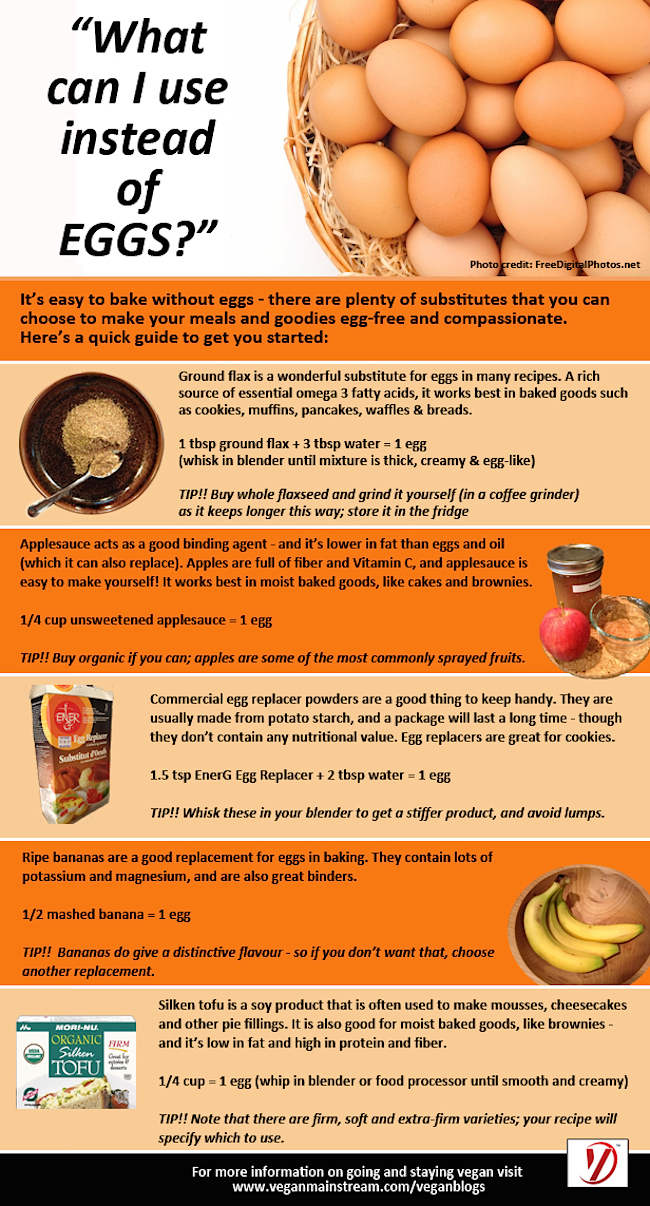 Sunnyside-Ups consist of delicate slices of silken tofu which are lightly seasoned with kala namak (Himalayan black salt), gently pan-seared, and then topped with No-Yolks Sauce. This rich sauce remarkably simulates egg yolk and is wonderful for dipping toast... 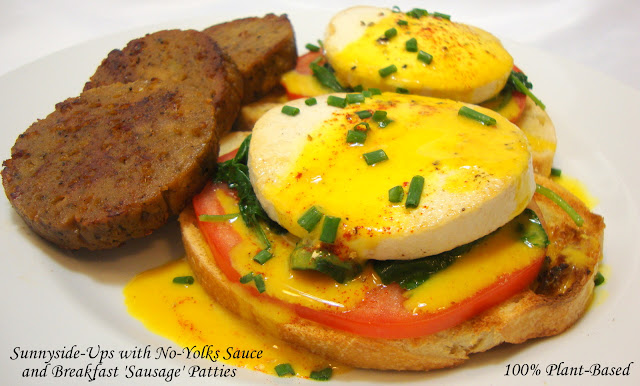 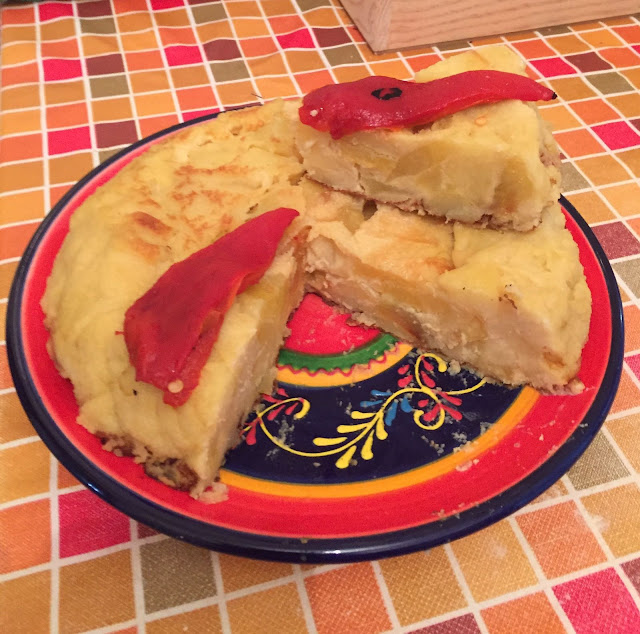 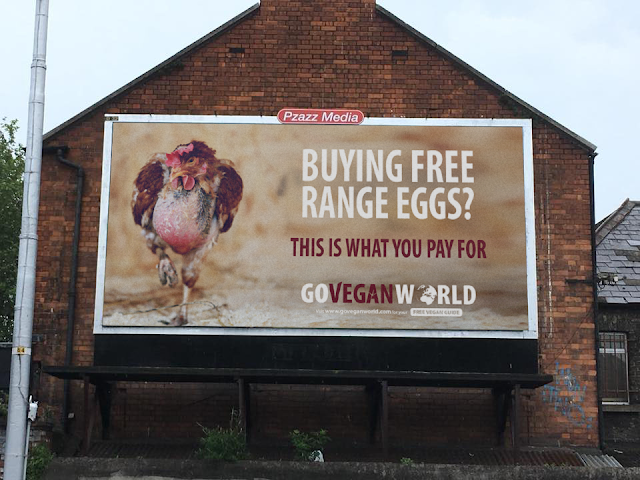