Ideas that make me be vegan

For me it is something real, small but real. A grain of sand. A grain of sand makes a beach. Makes me happy because it is real. Veganism reduces animal suffering and death by decreasing demand. (the World is vegan! If you want it). It is an obvious choice.

It represents a rejection of the commodity status of nonhumans and our recognition of their inherent value. Is the most important form of political activism that we can undertake on behalf of animals.
If we want to abolish animal exploitation, a vegan movement is a necessary prerequisite. And that movement begins with the decision of the individual.

With every meal that i eat, cada vez que como, I contribute to fulfill all the points that i mention below. Cada comida es como un granito de arena para la realización de los objetivos que menciono a continuación. For the love of our planet, the love towards the animals.

2 - To abolish animal exploitation.
• Veganism is the one thing that we can all do today — right now — to help animals. It does not require an expensive campaign, the involvement of a large organization, legislation, or anything other than our recognition that if ‘animal rights’ means anything, it means that we cannot justify killing and eating animals. Is not merely a matter of diet; it is a moral and political commitment to abolition on the individual level and extends not only to matters of food, but to clothing, other products, and other personal actions and choices.

• Animals: Our Moral Schizophrenia :
We claim to take animals seriously. We all agree that it is morally wrong to inflict ‘unnecessary’ suffering or death on animals. But what do we mean by this?
Whatever else it means, it must mean that it is wrong to inflict suffering or death on animals merely because we derive pleasure or amusement from doing so, or because it is convenient to do so, or because it is just plain habit. But the overwhelming portion of our animal use — just about all of it — cannot be justified by anything other than pleasure, amusement, convenience, or habit.

• Our Treatment of Animals
There are animal welfare laws that require us to treat animals ‘humanely,’ but these laws are largely meaningless because animals are property; they are economic commodities that have no value other than what we accord them. As far as the law is concerned, nonhuman animals are no different from cars, furniture, or any other property that we own.
Because animals are property, we generally allow people to use animals for whatever purpose they want and to inflict horrible suffering on them in the process.

• Why not get better laws and industry standards?
Most animal protection organizations in the United States and Europe maintain that the solution to the problem of animal exploitation is to improve animal welfare laws or to pressure industry to improve standards of treatment.
These organizations campaign for more ‘humane’ methods of slaughter, more ‘humane’ systems of confinement, such as larger cages, etc. Some of these organizations maintain that by improving treatment, animal use will one day be ended altogether or will at least be reduced significantly. But is this the solution? No, it is not.
The economic realities are such that welfare reforms provide little, if any, improvements. We have had animal welfare standards and laws for more than 200 years now and we are exploiting more animals in more horrible ways than at any time in human history.
The characterization of animal exploitation as becoming more ‘humane’ encourages the public to become more comfortable about animal use and this encourages continued consumption of animal products and may even increase net suffering and death.

• Veganism is also a commitment to nonviolence. The animal rights movement should be a movement of peace and should reject violence against all animals  (human and nonhuman).
We cannot justify the intake of animal products on the ground that we need to eat them for reasons of health. We clearly do not need to do so. In fact, the evidence increasingly shows that animal products are detrimental to human health.
We cannot justify it on the ground that it is ‘natural’ because humans have been eating animals for thousands of years. The fact that we have been doing something for a long time does not make it morally right. Humans have been racist and sexist for centuries and we now recognize that racism and sexism are morally wrong

There is a growing consensus that animal agriculture is an environmental disaster :
According to the FAO, animal agriculture generates more greenhouse gas emissions than does the use of gasoline in cars, trucks, and other vehicles used for transport.
• Livestock use 30% of the earth’s entire land surface, including 33% of the global arable land used for producing feed for livestock.
• Animal agriculture is resulting in deforestation as forests are cleared to make way for new pastures and in serious widespread degradation of land through overgrazing, compaction, and erosion.
• Animal agriculture is a major threat to the world’s increasingly scarce water resources. Large quantities of water are needed to produce feed for livestock; widespread overgrazing disturbs water cycles; and animal agriculture is a serious source of water pollution.It takes more than 100,000 liters of water to produce one kilogram of beef, and approximately 900 liters to produce one kilogram of wheat.
• Animals consume more protein than they produce. For every kilogram of animal protein produced, animals consume an average of almost 6 kilograms, of plant protein from grains and forage. Because animals consume much more protein than they produce, grains that should be consumed by humans are consumed by animals instead.
• Fight Climate Change by Going Vegan. Eating Meat and dairy products = Overheating the Planet.  Animals as Food = Global Depletion. Vote with your forks.

Many  times, most of the problems arise because of our attitude of ‘let it be’. “Chalne do” as said in Hindi. We do not want to think. If we think, then we might have to find newer and better ways. We will have to change our lifestyles and that is what we fear.
Our consumer choices can have a profoundly positive effect on other people, on the planet, and on non-human animals.

People everywhere are making choices more connected with their values. We are simplifying our lives, buying less and living more because we know that the Earth provides enough to satisfy everyone's need, but not everyone's greed.
But there is one connected choice that sometimes gets overlooked. It's one of the most far-reaching personal, practical and ethical choices you can make. With this choice we can help...

-feed ourselves and every hungry person on the planet. Food security.
-end deforestation
-replenish the deep woods of the North and save our disappearing rainforests.
-revitalize our rural landscapes and save family farms.
-stop the number one polluter of water and the number one waster of water.
-return our oceans to thriving underwater worlds teeming with life and wonder.
-make cancer and heart disease a rarity instead of a common occurrence.
-stop the unnecessary suffering of billions and billions of animals.
-and return wild lands to their rightful owners
-sustainability of our Planet (we got only one planet)

This powerful choices can be done by everyone every day... by you... right now. Every day you are invited to make choices. Live your values. Change the world. It's that simple.﻿

• Comfortably Unaware: Global Depletion and Food Responsibility... What You Choose to Eat Is Killing Our Planet.
With unapologetic disclosures, Oppenlander professes his concern for the state of the planet, while charging that many renown spokespersons who tout responsible and sustainable living are often mismanaging the information, or unwilling to tell the whole story. Richard Oppenlander supports a plant-based diet that he claims provides optimal health for our bodies and our planet. His book COMFORTABLY UNAWARE introduces us to our responsibility in global depletion, and encourages us to think about our food choices with every bite.
• Food Choice and Sustainability: Why Buying Local, Eating Less Meat, and Taking Baby Steps Won't Work (Oppenlander) 🔗

Acknowledgement of the relationship between all creatures and things

13 - Veganism is not a sacrifice; it is a joy
The word "vegan" was coined in 1944 by Donald Watson of the Vegan Society of the UK. This definition states: Veganism is a way of living that seeks to exclude, as far as possible and practicable, all forms of exploitation of, and cruelty to, animals for food, clothing and any other purpose. As you can see, veganism is not defined as a diet, but a way of living. 🔗  While vegans follow an animal-free diet, they also do not wear animals or use them for entertainment or any other purpose. 🔗


How Do I Go Vegan (recipes) 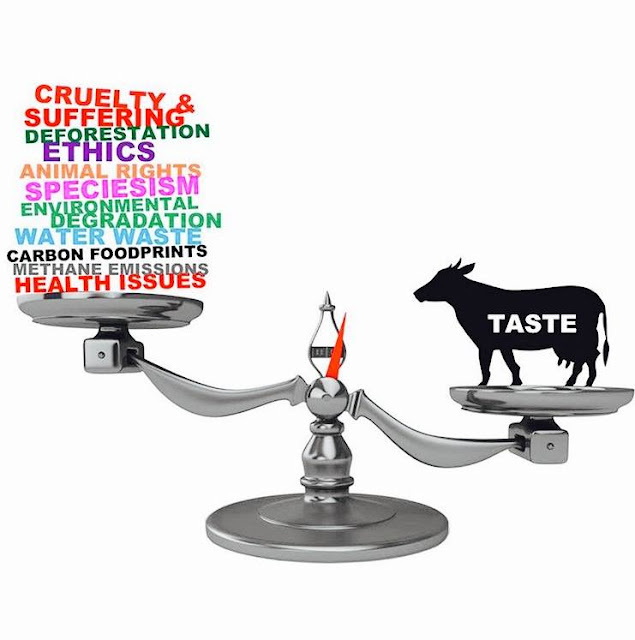 🐄  May all animals be free of suffering 🐄

🐓 May all animals be free 🐓