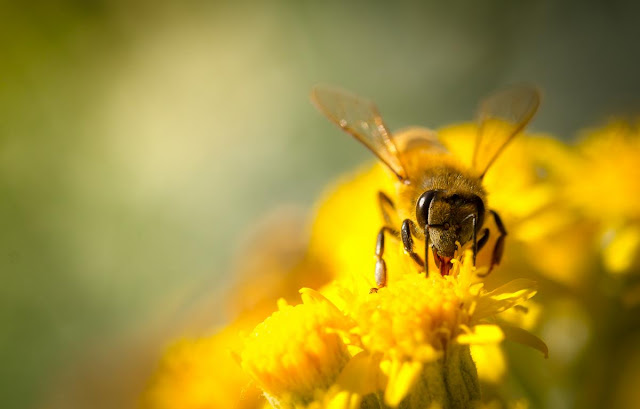 Honey is probably the product most frequently mistaken as vegan-friendly. There is a common misconception that honey bees make their honey especially for us, but this couldn’t be much further from the truth.
Honey is made by bees for bees, and their health can be sacrificed when it is harvested by humans. Importantly, harvesting honey does not correlate with The Vegan Society's definition of veganism, which seeks to exclude not just cruelty, but exploitation.

Dancing Honeybee ('waggle dance') using Vector Calculus to Communicate
“It must not be forgotten, warns German biologist Ulrich Warnke, that every insect is equipped with a pair of antennas, which are demonstrably electromagnetic sensors. In fact, the signals communicated between honey bees when they meet and touch antennas can be recorded by an oscilloscope and appear to be frequency modulated between 180 Hz and 250 Hz.
And the famous waggle dance, Warnke reminds us, by means of which honey bees tell each other the precise direction of food sources with respect to the sun, depends on their knowing the exact position of the sun, even on cloudy days, and within the darkness of the hive. Bees accomplish this feat by sensing minute variations in the earth’s magnetic field—a sense, he says, that can be rendered useless under the assault of wireless transmissions with their constantly changing magnetic fields.
The quickest way to destroy a bee hive, investigators have found, is to place a 📱wireless telephone inside it. The results of such experiments, considering the complete denial by our society that wireless technology has any environmental effects at all, have been almost unbelievable” (pag. 347 paperback edition of THE INVISIBLE RAINBOW A History of Electricity and Life  by Arthur Firstenberg.)
Warnke believes that HAARP—the High-frequency Active Auroral Research Project—is responsible for the worldwide outbreak of Colony Collapse Disorder that began in the winter of 2006-2007.
HAARP an “ionospheric heater” is the most powerful radio transmitter on earth. Capable of emitting a peak effective radiated power of four billion watts, its purpose is to set the biosphere to ringing.
In 1988, when planning for HAARP was still in its early stages, physicist Richard Williams, a consultant to Princeton University’s David Sarnoff Laboratory, called the project “an irresponsible act of global vandalism.” (pag. 349).
The frequencies of HAARP, says Warnke, superimpose unnatural magnetic fields on the natural resonant frequencies of the sky, whose daily variations have not changed since life appeared on earth. This is disastrous for bees. They “lose an orientation,” he says, “that served them for millions of years as a reliable indicator of the time of day.” (pag. 350).
🐝 Download and/or view the PDF about the research that i did about honey from a vegan point of view (version 4, Noviembre 2021)

🐝  May all animals be free of suffering 🐝